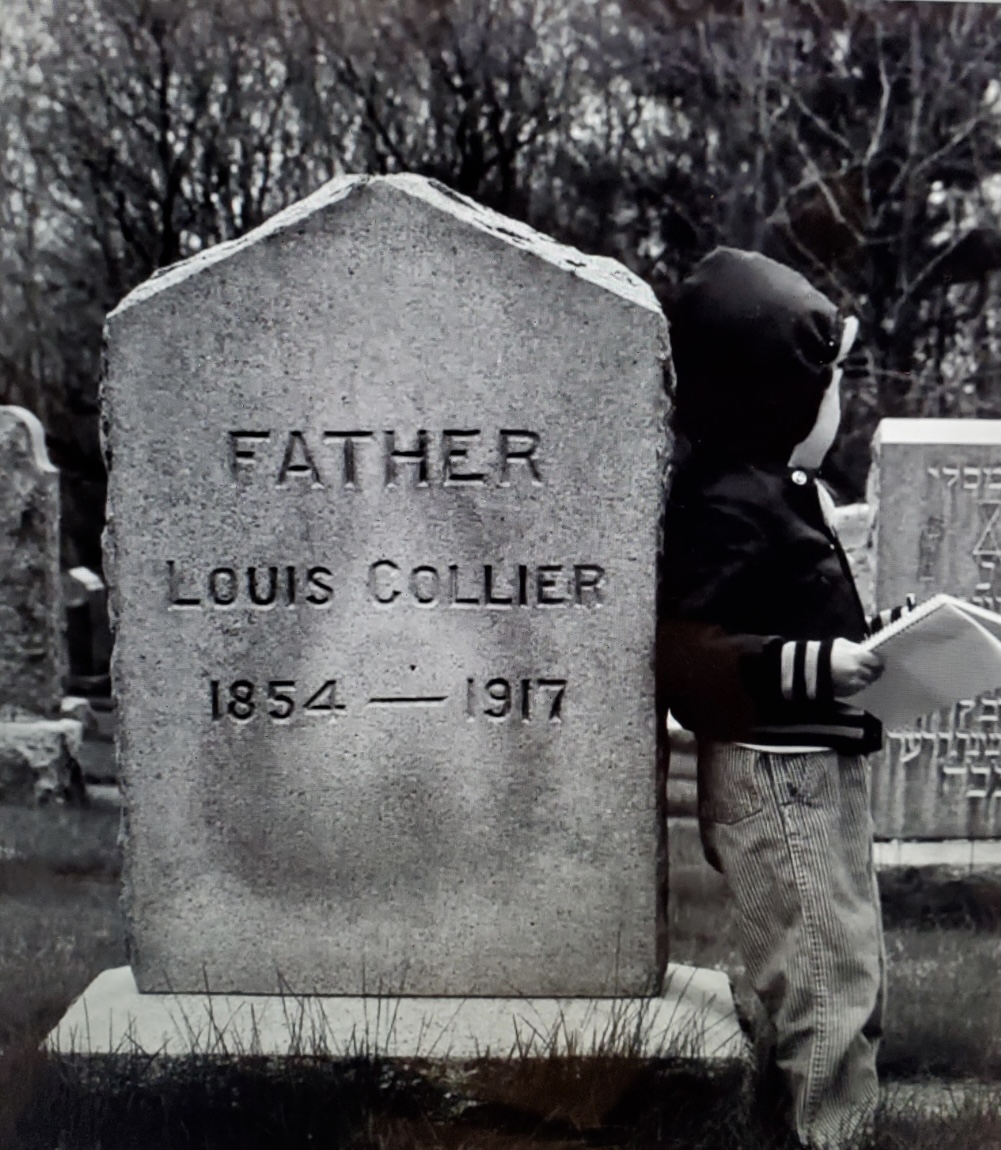 In the mid-1980s, when I was about four, we visited Sons of Jacob Cemetery outside of Danvers, Massachusetts. Mom had a conference in Connecticut, which meant that my sister and I were in tow, as was grandma, our caretaker. The cost of four airline tickets was irrelevant as the sum was unmanageable. We drove from Michigan.

Grandma had heard, from her father, about the cemetery though she’d never been and carried vague direction. It took us hours, that fall afternoon, as well as welcome guidance from strangers. Grandma, now 94, recently told me, “We were driving around and around, I was aware that we were stranded with no idea where, so we got into the car and drove out to this ‘farm,’ which it was not!”

After searching for family among the Jewish cemeteries of Salem, we’d finally found our way, having schlepped another thirty minutes on the road. “As you enter the gates, my grandparents are right in front,” Grandma recalled. “I was fascinated that the name of the cemetery was Sons of Jacob as that was my great grandfather’s name and all his sons were buried in this cemetery.”

I have no memory standing aside my great great grandfather’s headstone. Father Louis Collier. 1854-1917. Eliezer—known as Lazer, then later as “Louis”—Kalir was the son of Jankel Moses Kalir. He was born and started a family in Mscibow (Mstibovo), Belarus, a small village near the town of Wolkavysk. He was the father of eight children. His twins were stoned to death during the 1881 pogrom. In 1887, the Jewish quarter in Wolkavysk burned. For Lazer, the uncertainty of immigration was less harrowing than the reality of persecution. He left for America in 1891.

Kalir (or Kaler, in some records) was anglicized as “Collier” at Ellis Island. Somehow, and the details are fuzzy, Lazer settled in Salem. He was soon followed by his eldest son, Ike. By 1892, his wife Meite and children Riwke, Hersh, and Feige had joined Lazer, too. My great grandfather, the youngest of Lazer and Meite’s children, was born Moses Napthali, in Salem, sometime during the spring of 1900. His actual birth date remains unknown. He would live as Arthur Miles Collier—a sculptor, socialist, and dedicated father who raised a family in New York City and paid for his only daughter, my grandmother, to study education at the University of Wisconsin-Madison.

I knew Arthur. He played with me as a child. One of his sculptures sits in my living room. I run my hand across chiseled wood and touch legacies carved by elders whose decisions—as fathers, as caretakers—made possible my livelihood.

Years before I visited Sons of Jacob Cemetery, my father abandoned me. He did so, for the first time, before my birth. For nearly four decades, I have weathered a man’s commitment to disassociation and distance, his fickle attempts at reconciliation, and the logic of intractable self-interest. Yes, I have met my father. We have spent time together, though always according to his terms and temperament. I even lived with him for a few months, during my college years, when I stepped away from studies and worked for awhile. He made me pay rent. Long before words enabled me to process such indignity, I intuited the necessary estrangement of father-as-noun from father-as-verb. I have learned that some relationships, despite inheritance, cannot be reformed.

My mother tells me I was almost delivered in a hallway, eager for her warm embrace. She was driven to the hospital, in the early morning hours, not by my biological father, but by Tomas—her longtime friend and my godfather. Tomas called grandma from the hospital, as she was in California, and told her to board a plane. I had arrived three weeks early. Tomas was, along with mom, the family I met on my birthday.

It appears as though Tomas once took me for a stroll through a rather unkept basement. Maybe it was a construction site. There’s a bucket of bricks, stacks of stuff, a ladder, and a dismounted electrical box. I’m in a stroller, though I’m not wearing shoes. I could look at this photo, now, as a father, and squirm, questioning why an asthmatic toddler was in this unventilated circumstance. And where are my shoes? But I know better than to chide a decades-old snapshot, because I know more about the context of care. Tomas was by my mother’s side, and with me, for years. At summer cookouts. Birthday parties. At Thanksgiving, sitting next to grandma, flecks of grey in his beard. He taught me how to dance. I flip through family photo albums and there’s Tomas, moving through everyday scenes, cooking, enjoying, being with us.

Tomas gave me a Sony Walkman for Christmas when I was five or six, the kind with a radio and a cassette player. This technology was as amazing as it was incomprehensible, so he showed me how each button worked and how a pencil could respool the tape. When I was 20, I tried to give Tomas a kidney, but by then it was too late. I learned that some gifts, despite intent, can neither be given nor received.

It’s been almost twenty years since Tomas died. Now that I am a dad, I’ve slowly attuned to Tomas’ lingering presence in my life and the reserves of care he passed along to me. His humility, and my youth, had previously prevented me from naming acts of grace for what they were, and were becoming, during those formative years of my life. There is so much, Tomas, that I would like to share with you. I wish you could hold my son like you held me, and teach him to dance.

My son was eight-months old in March of 2020 when the COVID-19 pandemic shut everything down. With Ebony, our family of three became a bubble. Our little one recently turned two. Unbeknownst to him, most of his days have been lived amidst a pandemic. Then again, he’s a toddler and a pandemic has not dulled his enthusiasms—there are books to read, and snacks to eat, playgrounds to play, and tantrums to scream, stairs to stumble down, and animals to visit at the zoo. By circumstance and by choice, I have—over the past two years—enjoyed our son’s company for a greater number of days than I have collectively spent with my father during the past four decades. Pangs of my father’s abandonment arise as our son grabs for a hand, pulls me close to build blocks or show me a stick. Observing firsts and everyday wonders is a reminder that I never shared such moments with my father. But Tomas was there. And so was grandma. And mom.

Our son refers to his paternal grandfather, my father-in-law, as “Pop-pop.” Pop-pop is grandfathering for the first time. It’s a joy witnessing our little one bask in Pop-pop’s excitement and care. Despite only connecting online these past many months, Pop-pop encourages, and cracks jokes, and asks questions. Too frequently has our son dirtied computer screens with hand-schmutz and food-prints reaching for his Pop-pop. And Pop-pop chuckles whenever Ebony and I voice even the slightest hint of exhaustion or frustration. “You only got one,” he’ll say. He reminds us to count our blessings, for we have many, and we do. Today, Father’s Day, we’ll call Pop-pop. I look forward to visiting with him. I know our son does, too.

I have cared little for a holiday whose blanket commercialization masks so much pain. Yet I am learning, as a father, a bit more each day about our son’s lineages and inheritance. I am trying to appreciate why a day, like today, can be meaningful. And tomorrow, and the day after, I will encourage our son to walk his path and carry forward the legacies of Lazer, Arthur, Tomas, and Pop-pop.