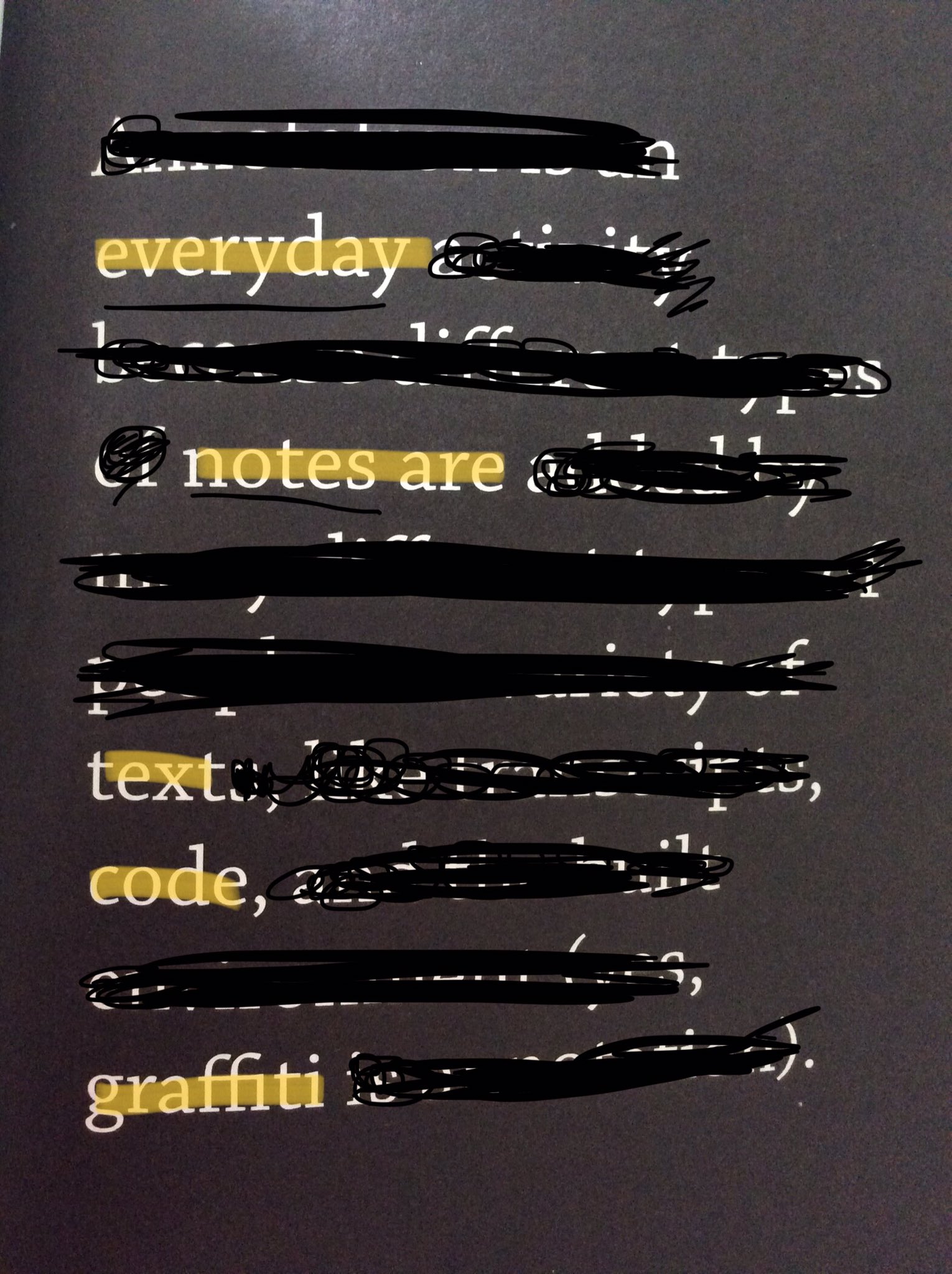 Annotation is a note added to a text. And you’re an annotator. You read and write annotation every day, it patterns the warp and weft of daily life.

“Presented by citizens of Perch Amboy, N.J., to Thomas Peterson, the first colored voter in the United States under the provisions of the Fifteenth Amendment, at an election held in that city March 31st, 1870.” Inscription on a medal presented to Peterson who voted on this day, March 31st, one hundred and fifty-two years ago, becoming the first African American to cast a ballot in a U.S. election under the provisions of the 15th Amendment. #Annotate22 90/365

March 30: Annotation with A1 Revisited.

“A1 Revisited is an opportunity to interrogate our past coverage, noting where we went wrong, considering how we would cover these events differently today, and collaborating with community members and organizations, and asking critical questions. We hope taking these steps will inform our journalistic practices today as we aim for fairer, more accurate, more equitable and more inclusive coverage.”

From project editors Cyrstal Paul and Emily M. Eng discussing The Seattle Times’ coverage of the forced removal of Japanese Americans from Bainbridge Island in 1942. #Annotate22 89/365

Stamps, corrected date, and notes added to a September 1st 1955 telegram sent from the Chicago Defender to President Eisenhower: “A Chicago Boy. Emmet [sic] Louis Till 14 was kidnapped and lynched in Mississippi this week, would you let us know if your office has plans to take any action with reference to this shocking act of lawlessness.” Today, March 29, 2022, President Biden signs the Emmett Till Antilynching Act into law. #Annotate22 88/365

“Mamoulian saved the back of his director’s chair that had been embellished with artwork and signatures. More than just an artifact, this piece of canvas is a record of the people who worked on this early sound feature film.” #Annotate22 87/365

March 27: Annotation with facts and analysis.

Molly White, along with a group of cryptocurrency researchers and critics, have annotated the New York Times’ “thinly-veiled advertisement for cryptocurrency that appeared to have received little in the way of fact-checking.” #Annotate22 86/365

“I leave this country not without bitterness and infuriation. I could well understand it when in 1933 the Hitler bandits put a price on my head and drove me out. They were the evil of the period; I was proud at being driven out. But I feel heartbroken over being driven out of this beautiful country in this ridiculous way.”

FBI surveillance of composer Hanns Eisler informed subsequent interrogations by the House Committee on Un-American Activities in September of 1947. Eisler and his wife Lou departed America on this day, March 26th, in 1948. #Annotate22 85/365

“Caption 3: But as important as these were the battles for safe, sanitary working conditions. This was dramatized by the terrible Triangle Shirt Waist factory fire in 1911. When the fire broke out the workers rushed to the exits and found them jammed. When the blaze was put out, there were 146 women burned to death. A horrified public demanded and won some new laws on factory safety and inspection in many states.”

A cartoon, by Fred Wright (illustrator) and James Lerner (reporter), about the Triangle Shirtwaist Factory fire which occurred on this day, March 25th, in 1911. #Triangle146 #Annotate22 84/365

Lambe-lambe (“lick-lick”) is a process of affixing wheatpaste posters to walls. Grafica Fidalga is the only lambe-lambe printshop in São Paulo making street art, as with this stunning poster of director Akira Kurosawa who was born on this day, March 23, in 1910. #Annotate22 82/365

“Equality of rights under the law shall not be denied or abridged by the United States or by any state on account of sex.”

The Butler Act “prohibiting the teaching of Evolution Theory in all the Universities, Normals and all other public schools of Tennessee” was approved 97 years ago on this date, March 21st, 1925. #Annotate22 80/365

“Colleen is a babe.”

The subversive etchings of adolescence–names, crushes, scribbles, hearts, most faded into the grain with time–added to a table from Kearney High School in Kearney, Nebraska (thanks Dane Stickney). #Annotate22 79/365

As reported and photographed by Jabin Botsford: “He crossed out ‘Corona’ and replaced it with ‘Chinese’ Virus.” #Annotate22 78/365

“COMMENT: Yes. But you are attacking civilians, bombing schools and hospitals, and looting aid. Which makes us think you do not actually believe this? Please explain.”

With righteous anger and fact, the Permanent Mission of Canada to the United Nations perfects the form of an annotated letter. #Annotate22 77/365

“An attempt is made to wring a confession from Hester Prynne.”

Yesterday’s alternate broadcast chyron, displayed as protest by Marina Ovsyannikova, on Russia’s state Channel One. She also shouted “Stop the war. No to war.” #Annotate22 74/365

New street art added to an electrical box along Colfax in Denver with a plea in Ukrainian that translates as “Cry, my people” or, more figuratively, “Howl my humans.” #StandWithUkraine. First posted (and also created by?) @animalartcrimes. #Annotate22 73/365

Editing a management poster by @chels_crew.

According to Truthout, “Workers at more than 100 Starbucks stores in 26 states have now filed for union elections.”

“Annotations shape how we are remembered by our classmates and how we remember our past selves.”

On yearbooks and history by Mary Klann and Kristina Poznan. Plus two identical yearbook notes, added to the yearbook from my junior year of high school; who copied the sarcasm? #Annotate22 71/365

March 11: Annotation with request and reference.

“I have tentatively chosen as a title for this work a line from one of your poems.”

Lorraine Hansberry’s cited request to Langston Hughes, dated February 8, 1958. A Raisin in the Sun premiered on Broadway at the Ethel Barrymore Theatre on this day, March 11, in 1959. #Annotate22 70/365

“This annotated Senate copy indicates controversial points in Article V, which designated an 1847 map by J. Disturnell as the basis for the U.S.-Mexico boundary. The Senate rejected a clause limiting changes to that boundary.”

Bathtub with faucets labeled “H” for hot and “C” for cold.

Bonni Stachowiak describes this annotated appliance at the start of Teaching in Higher Ed episode 404, featuring this project (thanks Bonni!). It airs tomorrow 3/10–stay tuned! #Annotate22 68/365

Honoring Emma Tenayuca on #InternationalWomensDay who organized the Pecan-Shellers’ Strike that ended on this day, March 8, in 1938 after 37 days of protest. #AnnotateLoC #Annotate22 67/365

“I’m sorry I think I still spelled it wrong.”

A handwritten apology added to a coffee cup. Thanks for sharing Tutaleni, I appreciate this as someone whose name is often misspelled and mispronounced. Need a fix? Visit WhatsMyStarbucksName.com
#Annotate22 66/365

“On March 7, John Lewis and Hosea Williams led a group of 600 African Americans from Brown Chapel AME Church six blocks and across the Edmund Pettus Bridge.” Today is the 57th anniversary of #BloodySunday in Selma, Alabama. #GoodTrouble #Annotate22 65/365

I took this photograph yesterday. A reminder that notes are routinely added to everyday objects and—while an annotator’s intent may be unknown—our reading of their commentary, and our civic priorities, is literal and allegorical. #Annotate22 64/365

“Make your mark on this city. And don’t be afraid to colour outside the lines.”

A mark and meditation on the city, with some visual irony, added to an everyday canvas by @WRDSMTH. #Annotate22 63/365

An annotated photograph of a photograph taken at the location of the Woman Suffrage Procession which occurred on this day, March 3, in 1913. #Annotate22 62/365

On this day in 1962 Wilt Chamberlain set the NBA single-game scoring record with 100 points for the Philadelphia Warriors against the New York Knicks. The final score was 169–147. #Annotate22 61/365

“As the thousands before her stood and bared their heads Miss Anderson with dramatic brilliance opened her recital with the singing of ‘America.’”

On revised lyrics and public performance from 1939 as #BHM turns to #WomensHistoryMonth. #Annotate22 60/365

A note about images:

#Annotate22 is an educational project and an act of public pedagogy. This year-long effort is comprised of blog posts, social media, and public Hypothesis annotations intended to advance new narratives about the relationship among annotation, literacy, and learning. Images are a key component of #Annotate22. The use of images follows best practices in fair use for media literacy education. Sources for all images are cited. Furthermore: a) Featured images are used for an educational purpose different than that of the original purpose, and are interpreted in an original and creative context; and b) The extent of featured images (i.e. a screenshot) is appropriate for the purposes of teaching and learning.